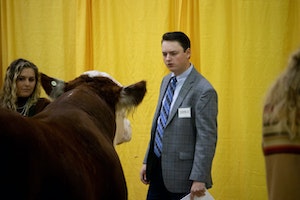 Boden was the top individual across the entire competition, performing well in every aspect of the competition.

“What I’ve learned and the journey that I’ve taken to get here has taught me way more than anything that I’ve accomplished,” said Boden.

All contestants are given 15 minutes to judge and place each class. During this time, they are able to handle the market lambs and do a close inspection on the cattle classes.

In their evaluation contestants are asked to place the animals from first to fourth place, while official judges also complete a placing. The contestant’s placings are then collected and compared to the official judges’ placings. If they match, they get the maximum amount of points for that class. If they differ in placings, points are deducted from the maximum score of 50 points per class.

The scores from the judging portion of the contest and reasons scores are then combined to get the top individual and top team placings.

To prepare for this contest, teams and individuals train throughout the year, learning every aspect of the competition. Boden and his team work with their coaches five to six days a week and give sets and reasons multiple times a week.

“What we get to learn as far as from our coaches and the people we get to be around is way more valuable than just a score at a judging contest,” said Boden.