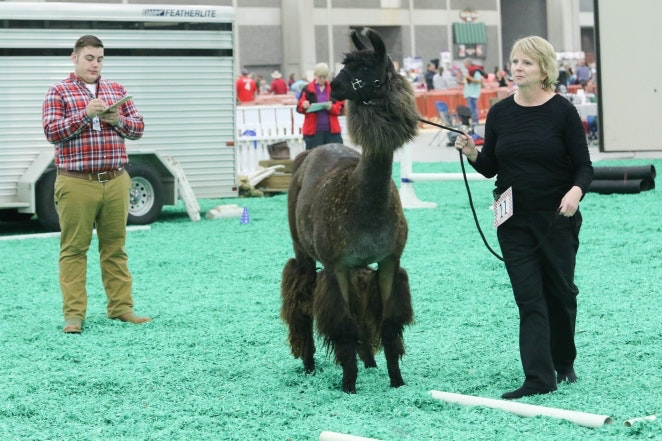 Vickie Maris Greeson is a well-known local artist and performer from Battleground, Indiana. What fans of her band Scott Greeson and Trouble With Monday may not know, is Greeson spends a great deal of her time showing llamas. Greeson showed her llama, SVL- Llovely Llana at the 2017 North American International Livestock Exposition (NAILE) in Louisville, Kentucky. Navigating Llovely Llana through, around, over and inside of different objects time and patience.

Greeson has raised llamas for eight years and shown them for seven. Her farm name, Heartsong Llama of Dawn of Promise Farm, comes from her first llama’s name, Heartsong, and her previous horse farm name, Dawn of the Promise Farm. Greeson grew up showing horses from the age of two and was the owner Connemara ponies that originated from Ireland. Now, when she isn’t performing music or showing llamas, she spends time making yarn, fleece, roving and felt to sell on her Etsy shop “Heartsong Llamas”.

Greeson also leases her llamas to 4-Hers in her area to give others the opportunity participate in livestock events. Kids will attend lessons a couple times a week and participate in local shows. Greeson enjoys paying it forward and allowing students that typically wouldn’t get the chance to be involved with livestock an experience she hopes they love. As if that weren’t enough, Greeson is also a social media and marketing professional and will be instructing a social media class at the University of Notre Dame this year.

The NAILE runs through November 16 at the Kentucky Exposition Center in Louisville, Kentucky.